Out in the woods, baby grouse explode from the ground like so many winged dumplings while their mother flutters into the opposite direction, clucking excitedly. The small oval hoof prints of moose calves are etched into the ground and three piles of warm scat that get increasingly smaller tell me into which direction a black bear has wandered off not too long ago while relieving himself.

Fur on fir: grizzly hair on a fir tree. 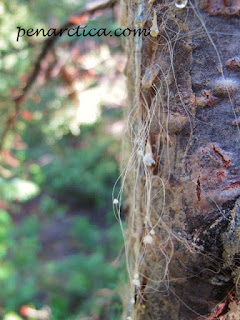 I’ve been padding through the forest on soft feet for the past two months, having traded in my worn out pair of hiking boots for homemade moccasins. It’s not that I try to be quiet and unobtrusive – quite the opposite, I always holler nonsense like “Yolla-da-schnoozle, moosel” in regular intervals to avoid surprise encounters with bears and moose. Wildlife doesn’t appreciate the feeling that somebody has snuck up on them (which is what a predator would to), and making noise broadcasts to all those critters out there that I’m not after their little ones or their own skin. It gives them a chance to quietly melt into the understory and greatly reduces the potential for conflict.
No, my moccasins have nothing to do with wanting to walk more noiselessly. After reading a book on barefoot walking that a friend of mine had written and collecting an impressive array of wild rose thorns, juniper needles and slivers in my feet last year when trying it out, I decided that some sort of light and supple shoe was necessary out here. Also I didn’t want to have to focus on where to set down my feet, something that was mentioned by barefoot walkers in the book as a great benefit – getting more in tune with the earth and all that. But I need to be in tune with the moose, bears and grouse out there, not the thorns in my feet instead.
Walking barefoot supposedly has all kinds of benefits. Since the human skeleton evolved without accounting for shoes with built-up heels, padded soles and constricted toe space, wearing shoes apparently puts a strain not only on the feet but knees, hips and the spine as well, forcing the body to adapt to those unnatural things strapped to our feet. From reading about ultralight hiking, I was also aware of how much difference it’s supposed to make not to be wearing a pound of leather, gore-tex and rubber on each foot which has to be lifted hundreds of times a day.
So instead of forking out a lot of money for new hiking boots this year, I glued a crepe waffle sole (Halford Hide & Leather in Edmonton sells them as well as all kinds of leather) underneath a pair of moccasins I made a few years ago to see if I can save myself some money and body strain.
My verdict after two months of walking in moccasins:
While it hasn’t helped with the occasional backache, I love that my feet and legs don’t tire nearly as easily as with hiking boots. Even when it’s hot (not really an issue this summer), my feet don’t get sweaty. Scrambling uphill and downhill over rocks, I am a lot more surefooted in the moccasins because my feet can grip the ground and my ankles can bend better.
On the downside, wherever the ground is moist I get wet feet because I chose not to treat the leather. But contrary to hiking boots, a soaked moccasin will be completely dry again 24 hours later. I did find the moccasins less comfortable than regular shoes when I was walking on asphalt on my town trip in June – I really noticed how hard and unyielding a surface that is. And while cold seeps through the very thin crepe sole, I found that wearing the moccasins inside a pair of sandals solved that problem.
So yay for homemade moccasins and money saved! Moccasins are pretty easy to sew, by the way. I just got a pattern and the materials, and without ever having sewn anything before managed to make not only one pair, but close to a dozen over the past years – including mukluks which are a knee-high winter version. One of the myriad of things I love about wilderness life is that you tend to try things out you might not otherwise. Out here, it’s a lot easier and faster to just do it yourself rather than buy it. 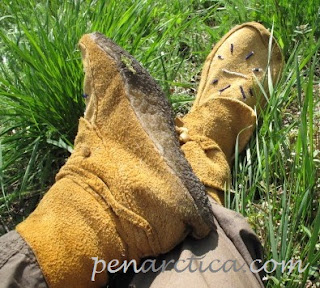