We’ve actually managed to make steady progress on the new kitchen and bedroom. I wanted to post about it more often but I rarely take pictures while working on something (my sincerest admiration to all the folks who post whole tutorials!), and I also have a hunch that not too many people are desperate for regular news about the evolution of our kitchen cabinets.
Anyway, the poplars we scavenged have not only made pretty boards, I’ve managed to turn them into furniture we like. I first wanted the counter to run in a simple L-shape, dodging the thorny issue of compound angles that would creep up if I made the corner more user-friendly; which I ended up doing though as you can see. 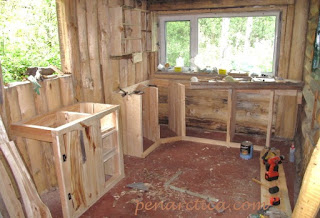 If any budding home builder or cabinet maker is reading this, I only have one piece of advice: learn how to use a carpenter square! Despite having built two round cabins, one hexagonal studio and a couple of rectangular buildings, I’ve never managed to learn how to calculate compound angles. Since my partner suffers from similar ignorance, I had to build the corner cabinet with my usual method of eyeballing things, measuring not only twice, but three times, cutting once and measuring and cutting again, laying lumber out on the floor and marking cuts, and using paper dummies (yay for paper dummies!).
This goes to prove, however, that carpentry at a fairly rudimentary level is definitely not rocket science and absolutely anyone can do it. If we manage to build things, so can you. Honestly.
After looking at a book about concrete kitchen counters I really wanted our new kitchen to have one. It’s amazing how beautiful these can turn out with the use of pigments, inlays and different trowelling and finishing techniques. A wooden counter top is what we currently have, and it ain’t pretty – there are burn marks from hot pots on it and because we had to build it out of three boards that inevitably shrunk somewhat, there are cracks that probably harbour all sorts of interesting life forms. So all in all, a concrete counter top seems to be better suited to our household. 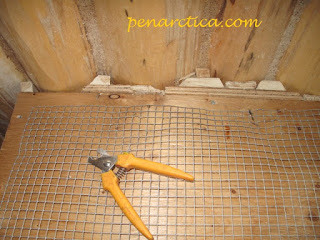 We used grey Portland cement and dark grey sand from the beach. Using two sheets of 3/4” plywood as a base (the book recommends cement backer board but I wasn’t too sure we’d be able to cut it without messing it up), I cut up some old hardware cloth from our duck enclosure for reinforcement. I put down half of the concrete, then lowered the wire mesh into it and put the remaining concrete on top. My mix (1 part cement, 2 parts sand, 1/2 part water) was a lot stiffer than shown in the book, I realized when I tried to trowel it smooth. I mixed small handfuls with different amounts of pigment and added them here and there to end up with a mottled colour. 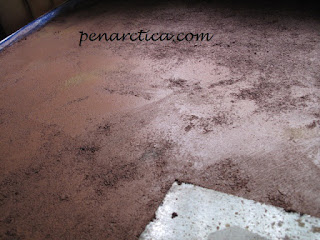 Trowelling is the trickiest part, I found. With the first counter section, I eventually forgot about checking for level, so it developed low spot in the middle. Trowelling with a larger tool would probably make it easier; I used a hand-sized mortar trowel which is all we have. After three days, the moulds along the edges can be removed and the edges smoothed and rounded with an axe file. This worked really well. A slurry of cement, water (or even better: cement bonding adhesive or white glue) and pigment then gets rubbed into whatever little holes and dents have popped up. The following day it’s time to sand the surface to a nice smooth finish. I had no idea you can sand concrete, but: you can! With regular sandpaper for wood. 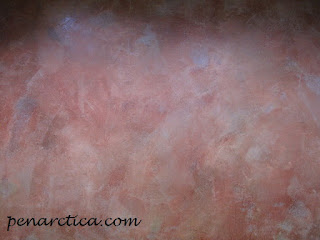 So this is where things are at right now: 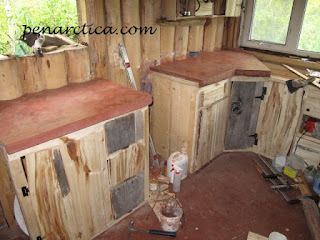 In the meantime my boyfriend has been working on the bed frame and closet. It’s all starting to look rather luxurious by our standards (which have so far revolved around open shelves and plastic boxes). Maybe we’re getting old. 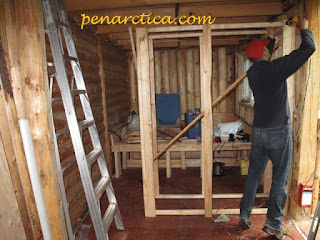 Since we’ll have to cram in time for hunting, meat processing (hopefully), berry picking and preserving as well as the garden harvest, it seems likely that we’ll get this finished at the very last moment as usual – just as the snow starts to not only fly, but stay (usually the end of October). Last night the sky was green with northern lights. 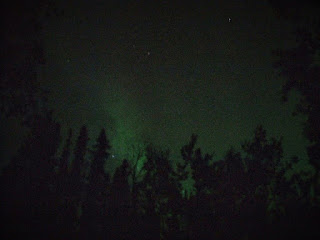