We’ve had the first dusting of snow on the mountains. The land is ablaze in colour, thousands of miniature suns glowing from the poplars while the fireweed has turned a bloody red. 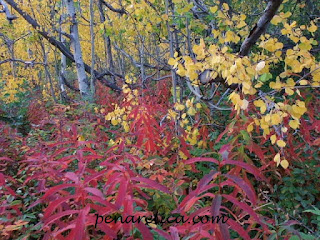 As green leaves become more sparse out in the woods our garden becomes irresistible to moose. After some kohlrabi and broccoli passed the taste test of a cow and calf, we built a “scaremoose” out of old clothing and a balloon we found entangled in a tree last winter. Unsure if the crazed grin of Winnie the Pooh would really keep the moose away, we’ve taken to covering our crops with tarps overnight – and I’m happy to report that we haven’t lost a single veggie ever since (we moose-proofed the garden about three weeks ago) even though the cow and calf still hung around our place for a while. 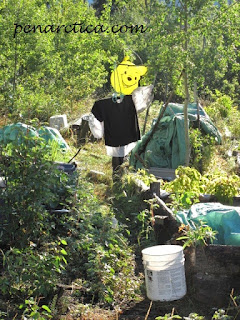 With the garden secured, we found that the patch of knee-high grass and dandelions I fondly call “my lawn” in front of the cabin attracted a porcupine. She sedately mowed down the last green fireweed and all juicy leaves she could find, clutching new fodder for an investigative sniff in her front paw. It appears that porcupines are very discerning eaters. 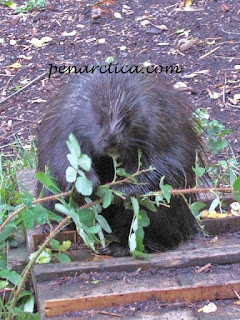 I was overjoyed to have acquired such a cute bio-dynamic lawnmower, though we’ve had to keep a close eye on the dogs to avoid prickly encounters. The porcupine isn’t very shy at all and the other day sat right on the ramp we have instead of stairs leading up to our front door, contentedly munching on a wild rose.
The first time showed up though (I have no clue if she’s female, she just looks very pretty and feminine, I find), she was uneasy about our presence and took refuge in the crawl space underneath our cabin. We had to get her out of there because it’s where the dogs have their “office”, their cool and shady hangout on hot days, and where the internet cables run out to the satellite dish. Porcupines sometimes enjoy nibbling on things such as plywood and cables, so out she had to go. I ended up worming my way into to the crawl space, armed with a rake, to shoo her out and could eventually persuade her that this was not a cozy place for her. It seems as if she’s harboured no hard feelings. 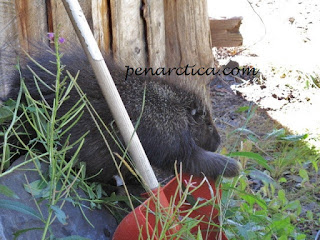 The day we finally got around to go moose hunting was rather gloomy. When we got to the place where we wanted we were happy to see two cows feeding in the area. It really helps putting bulls at ease when they can smell and hear a cow and aren’t just responding to a call of what must to them seem like an invisible cow.
Even before we called, a young bull showed up who immediately honed in on us once we called. He swam towards us and my partner was able to drop him with a single shot when the moose was already close. I loathe this part of the hunt, the actual killing, but because everything went so incredibly fast, the death of the little bull was somewhat easier to stomach. I apologized to the moose as I always do, as if that would make any difference to him who’d have loved to keep on living, and within two and a half hours we were already home again with the meat. We always try for a small moose, a yearling or two-year old because not only is the amount of meat perfect for us and the quarters easy to handle, but the meat is the best quality. Older, larger moose often have large bruises from fighting once they’re fully in the rut and their meat can be less tender.
We hung the quarters and meat from chest, neck, ribs and back on our porch and started a smudge fire when it got so warm one day that the flies came out.

Another advantage of getting a small moose who is not fully in the rut is the excellent liver (which becomes inedible in rutting moose). Moose liver is very mild-tasting and can be prepared just like calf liver. We find it freezes well when vaccuum packed. My partner will take most of the meat out to the closest village where we keep a freezer. Throughout the year, whoever of us goes into town (usually him every 4 to 6 weeks) brings a few packages of meat back in.
We also can meat to have on hand during the months of freeze-up and breakup when we can’t get out, but it using the freezer in town gives us the chance to also eat steaks and overall a much greater variety of meals which also taste better. Canning invariably renders meat stringy, soft and somewhat dry. Moose tongue is very tasty when boiled for about three hours with peppercorns, cloves and bay leaves.
This moose had a fair amount of fat, so we rendered a lot of it. Rendered moose fat is fairly good for frying meat and can also be used to make tallow candles. It does have a distinct flavour, though. 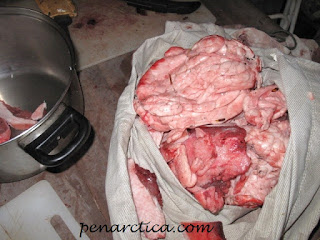 But cutting up, grinding and packaging the meat is the most time-intensive task of it all, especially with a little hand grinder. Processing the meat usually takes us anywhere from four to seven days, depending on the size of the animal. Not only te cutting and grinding takes time, but also cleaning the grinder multiple times each day, and repeatedly washing all the pots, cutting boards and knives. Needless to say, all that washing means a number of extra trips with water buckets from the lake to the cabin. 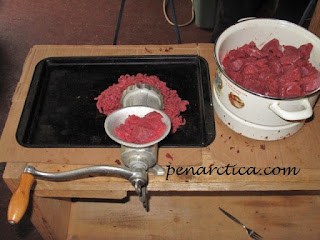 With the moose hunt thankfully over and out of the way now we can focus on our remaining carpentry projects while winter slowly tightens its noose. In that regard this moose is not only a gift of meat for us, but of time as well.
Labels: animals wilderness life