If you guessed that this blog has been quiet because we’ve been trying desperately to get most of our work on the cabin done before snow – you’re right! And if you guessed that we might have had some problems with our power supply – you’re also right. But I’ll let you know about our misadventures with off-grid electricity another time. 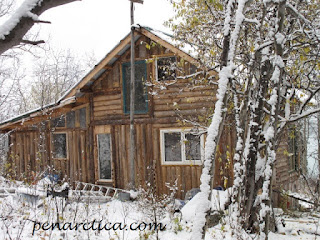 Here’s the latest from the snowy wilderness cabin remodelling front. We broke through the wall of our cabin into the addition in three places (two of the new openings combined into a large doorway into the new kitchen). 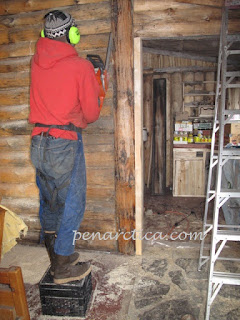 Because our log home is post-and-beam (also called pièce en pièce), uprights posts carry the structural building load while horizontal filler logs largely serve as just that: fillers. They do add stability to the posts, but it’s easy to cut new doorways into such a building. Of course we’re saving all the sections we’ve cut out (potential future use is for a winter garden or mud shack/sheltered entrance).
So you can fully appreciate how our cabin is morphing from cluttered impromptu bush shack to wilderness luxury abode, this is was our kitchen looked like for almost ten years: 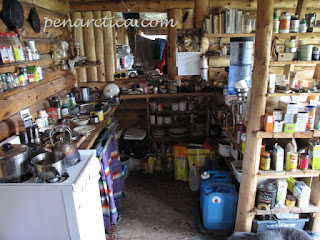 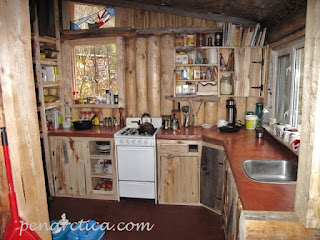 My partner, who usually ends up doing all the cooking while I do the eating, felt inspired to bake bagels for the first time in ten years – for that alone it was worth the work! 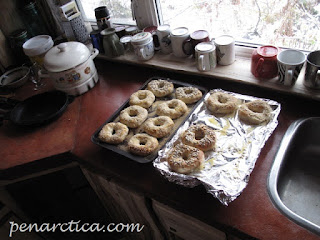 We used to have a wood cookstove on the stone floor but have decommissioned it for the time being because we don’t have a large enough wood stove to heat our now rather large cabin with (26’x24’, plus half an upper storey). For now, we’ll be using two wood stoves and we took the legs off this one and set it right on the stone floor to combat the problem of cold feet in the wintertime – a common thing in many cabins. Because heat rises and the firebox of most stoves is situated somewhere around knee level, it means that without a fan you’re always toasty from the knees up while your toes are fighting frostbite. This can be easily fixed without a fan by removing the stove legs and having the stove sit on a heatproof surface. 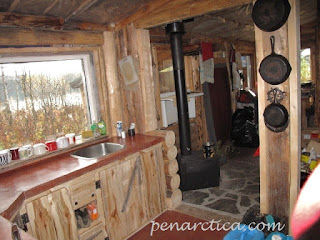 The bedroom is also more or less done, but the to-do list remains crowded: a bench and table, closet, bathroom and library are still on the agenda. By now our work gets increasingly hampered by rain and snow (we still have to plane and sand the boards we milled, not to mention cut them to size).
Boating season is pretty much over. 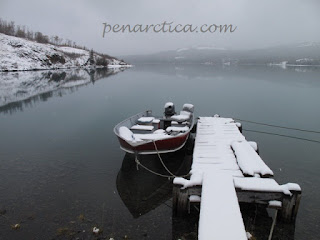 Over the next few days, we’ll carry our kayaks and canoe up to our shed where they can spend the winter protected from snow and moose (who’ve been known to inadvertently breaking the odd boat by stepping on it in the winter).
Some poplars are still clinging stubbornly to their leaves, but about 90% of the deciduous trees and shrubs are already bare and flocks of songbirds, loons, swans and geese have already come through on their way south.
I love this time of year when the land empties, tilting noticeably away from the sun and letting our summer light and animals spill back down south.
Labels: carpentry wilderness life