Mission accomplished – the dog was saved, and we’re back home. 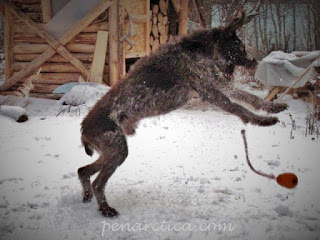 Sunday morning brought an email from the pilot, letting me know that she was on her way. I had cranked up the heat in the cabin to 25°C, moved the most important items that shouldn’t freeze into our small root cellar, most of the electronics upstairs where I covered them with sleeping bags, stacked wood inside for quickly heating up the cabin upon our return, packed a few things for the dogs and myself – and went outside to listen for the heavy whup-whup-whup of rotor blades.
When the helicopter landed, the pilot didn’t shut down, and while the old dog who had been in a chopper before tried to climb in, my sick boy was rather terrified. I eventually carried him over to the machine and lifted him inside, and flying through a small hole in the fog blanket we were finally on our way to the village where a friend was already waiting for us in her van for the two-hour drive to Whitehorse.
An x-ray at the vet’s showed a huge mass in the dog’s guts, effectively sealing off his stomach from the intestines. From then on, it was a waiting game – because his vital signs were still good, the vet opted for IV fluids, enemas and laxatives instead of an operation. We left him in excellent care at Alpine Vet Services for the night and tried to make the most of being stuck in the city: soaking in a bath tub (my friend also lives off-grid), eating fresh food and just hanging out together.
By the next day, only some of the impacted mass had left the dog’s bowels (mostly soil as well as moose poop) and he was doomed to another day and night of ceaseless attention to his rear end, while my friend, my old dog and I resigned ourselves to being stuck in town. I was allowed to visit the poor poop eater, who looked scared and stressed, but finally relaxed a bit after inhaling my smell as I gave him a good long ear rub.
On Tuesday morning, I called the clinic again.
“I have good news”, said the vet. “The best news, actually: he pooped!”
Rarely has such an expensive pile of poop been greeted with such jubilation. I was ecstatic that he was well again and couldn’t wait to pick him up and go home. Because it was already afternoon by the time we made it back to the village, I spent the night at my friend’s and witnessed the most amazing transformation of my old dog, who was inspired to trot around at a fast clip and even lift his leg again for peeing because he wanted to show her dog who was boss! I guess I should take him out more often.
Wednesday dawned warm and cloudy, and after loading the dogs into the helicopter, the pilot flew us back through the mountains to our lake and home, sweet home. As I hunched down low over my cardboard boxes of fresh groceries and frozen moose meat in our meadow, the Jet Ranger lifted up into the air and grew smaller and smaller until utter silence fell, shrinking me back into place. 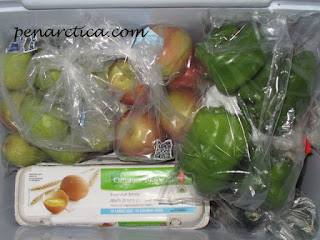