This is the time of year when things tend to go wrong; or maybe it’s just more noticeable because replacing broken equipment or seeking medical attention need to be either postponed until late January or early February when the lakes are safely frozen – unless it’s important enough to spend over $700.- for helicopter transportation (and that’s just for one flight).
I hope we got our late season problems out of the way early this year by having to replace half of our solar power system. Depending on your own alternative energy system may have a ring of freedom and sustainability to it, but in reality you just accumulate highly toxic batteries and an expensive collection of components made from non-renewable resources. And the more components something has, the more can go wrong. Especially when you help problems along through poor decision-making.
When the two deep cycle batteries that store our energy wouldn’t charge fully anymore, we were annoyed – the solar charge controller that monitors the batteries’ state of charge and regulates how much juice comes into the batteries from the solar panel (you don’t want to overcharge them) told a sad tale of rapidly dropping voltage. We had expected to get more than a measly three years of usage out of the batteries which had cost over $500.-, but what could we do? Not much other than buy new batteries – of course the warranty on these guys had just expired.
That was back in August, and I was planing boards when my partner set up the new batteries – different ones, because we wanted something that hopefully lasted longer than three years. He came out and asked me if the old batteries had been two 6 Volt or two 12 Volt.
“Six Volt”, I said. Of course. The ones before them had also been 6 Volt batteries, which we hook up to effectively become one powerful 12 Volt battery. “Doesn’t it say anything on the label?”
“No. Are you sure?” He looked confused and nervous.
“Yeah.” I shrugged and continued planing, only to be interrupted minutes later by my now decidedly pale-faced partner.
“I think I screwed up the batteries”, he said. “There was a huge spark when I connected them. It partly melted the battery poles.”
My knees went weak (all that money! It didn’t even occur to me at the time that the batteries could have exploded). I followed him into the cabin and stared in disbelief at the battery poles. “The cable goes on the positive pole first. Did you …?”
“That’s what I did.” He swallowed, tried again – and it sparked.
We used the f-word in unison, stared at the by now not so new-looking batteries, then at each other. Then at the two old batteries.
“I think”, said my partner hoarsely, “the old ones are 12V.”
I cast a doubtful look at them and scoured my brain (I had bought them, after all), but my memory chose to say nothing. In order to connect two or more 12V batteries and not add up their voltage as you’d want with two 6V batteries, they are hooked up differently (in parallel instead of in series). By now, we were both so rattled nothing seemed to make sense anymore. I hunted up an ancient catalogue from an alternative energy supply store and as we looked at the diagrams quickly realized that we had shorted our brand-new batteries, and that the old ones had indeed been two 12Vs.
After our mistreatment, the two new 6V batteries had only the same poor capacity as the two old batteries and it became obvious that we needed to replace them again. Which we did a few weeks later – but the story doesn’t end there.
As we hooked up (correctly!!!) the replacement 6V batteries, the solar charge controller displayed their voltage as 11.8V. How could that be when they had had 12.4V the day before at the store? An unpalatable realization dawned on us: the solar charge controller was shot. We checked the batteries with two other volt meters and found our suspicion confirmed.
This was in September and the time to quickly replace things was running out, unless we wanted to do extra town trips. But since I now had the expediter and one last delivery of goods scheduled for mid-October, I simply had a new solar charge controller sent to them and asked to please put it on the plane. The only problem for the meantime was that because of the malfunctioning charge controller, not much charge came to the batteries from the solar panel and we never knew exactly how full the batteries were (our two other volt meters gave only a ballpark measure). For batteries to last, it’s important to not draw them down too low, to fully charge but not overcharge them. Charging them with the generator was a guessing game until…
…until our 1,000W Yamaha generator which had been acting up occasionally broke down completely. It still ran but produced no power. It was late September by now and though we felt sick at the thought of yet another large expense, it was extremely lucky that the generator died when it did. I fired off another email to my expediter to please pick up a new generator – we now went with the 2,000W Honda, a model that has an excellent reputation for reliability and longevity among off-gridders. 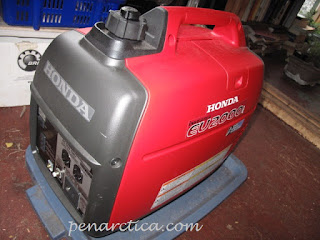 Oh yeah, and since the malfunctioning solar charge controller kicked off this sequence of events, we’ve also realized now that our old batteries didn’t need replacing yet. We’re using them to power our three LED lights now and want to set them up as extras next summer, so we can switch the charge from the solar panel between the two sets of batteries when one set is fully charged.
All this expense and trouble to run a satellite internet modem, laptop and three LEDs!
And here ends my tale of off-gridding woe. Lessons learned:
– Double-check on how to hook up batteries before doing so, and not after the fact
– Invest in a second volt meter that shows the exact voltage
– Always look on the bright side of life!
For those of you interested in off-gridding or proper battery maintenance – I’ve found this webpage to be one of the most straight-forward and easiest to understand.
Labels: off-grid wilderness life