It’s been a long time coming – for the first time in sixteen and a half years, I have an indoor shower again and it ain’t a beauty. But it works. I haven’t been posting anything about the still ongoing renovations because I want to surprise my boyfriend, but the shower in its current incarnation is of such ugliness that I think it prudent to give him a chance to get used to its eye damaging glory.
If you wonder how we managed to stay clean all these years without a shower – well, we didn’t. Come spring we simply crack off the crust of grime by flexing our muscles; hence the term “spring breakup”. Okay, that’s a lie. What we have had so far are a sauna, the kitchen sink and wash cloths, plus a bathtub by the lake where the water gets heated by building a fire underneath. The bathtub is very romantic but somewhat tedious and slow to operate, and nothing we’ve felt inclined to use in the winter (in the summer it takes about half an hour to forty-five minutes for the water to get to a temperature that won’t give you hypothermia). 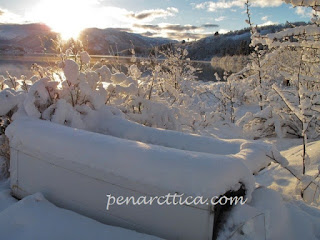 We also have a shower set up outside, in a tiny greenhouse-like shack that’s remarkably free of mosquitoes in the summer and fun to use. It features a simple bucket system: heat up water on the stove, fill into bucket, lift bucket onto shelf and stand under it. I used the same system for our new indoor shower (WARNING – eye damage may result from the hideous mail-order shower curtain and the OSB walls further down). 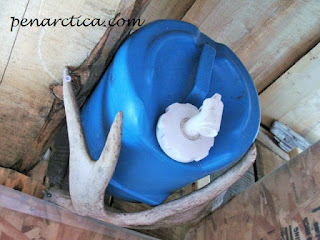 Now that our cabin is so big, we could have a water tank upstairs and a gravity-fed running water system, but I feel that’s too much trouble just for having water come out of a spout. It would mean having to pump water up into a tank and having to drain the water system or risk frozen pipes if we wanted to go anywhere in the winter. Life is so much easier with buckets.
We’re slop bucket people. Our kitchen sink drains into a bucket, circumventing the problem of frozen drains and a steady draft of frigid air in the winter. I’ve implemented the same system in the shower – my boyfriend had the idea to use a small box instead of a bucket so the tub wouldn’t sit so high. Works great! 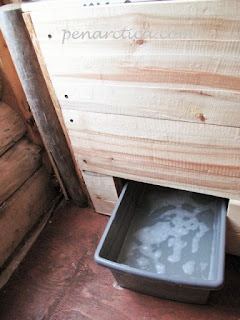 The tub to stand in is a regular metal laundry sink, so it’s not what you’d call spacious but with the two small board extensions along the sides, it works to a usable size. I inherited it from a friend who left the north, while the curtain rod is part of a tent frame that was given to us by another friend. 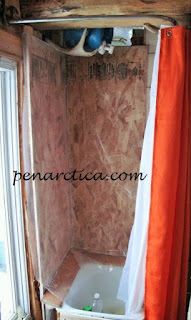 The OSB walls are terribly ugly, especially with the plastic sheeting over top, but that’s just a temporary solution.
I hadn’t been able to make up my mind what to make the walls out of, waffling between painted OSB (still ugly) or stone and concrete siding like I have used in my studio around the stove (but won’t the water soak through?). 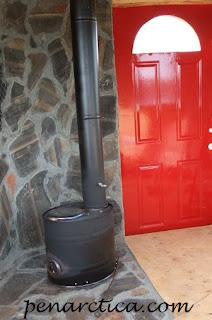 I settled for the stone and concrete, but only a few weeks ago. Since the flat rocks and sand for mixing the concrete are currently under snow and/or water, putting up the rocks over the OSB will have to wait until late spring. And hopefully I can find a cheap but more aesthetically pleasing shower curtain next year!
Labels: carpentry off-grid wilderness life