... and then there were two

My four months of solitude ended on Thursday in a cloud of whipped up snow and rotor noise as the helicopter set down in our meadow and my partner, veggies, antibiotics for my chronic tonsillitis and (unfortunately) the flu tumbled out. 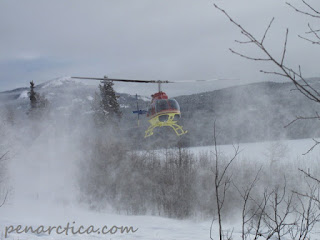 To a hidden observer and even to myself, the desperate frenzy I flung myself into before my boyfriend’s arrival would have had quite the entertainment value. For days on end, I dashed through the cabin like a woman possessed, wielding a hammer, varnish, broom and dishcloth, slightly hampered by a sudden influx of translation work and the finally corrections of my first book. Bush life being what it is, my preparations for welcoming him home after all this time were focussed to putting the finishing touches on the furniture I’d built in his absence, putting away tools and stocking up on water and firewood instead of primping my hair and donning attractive clothes. 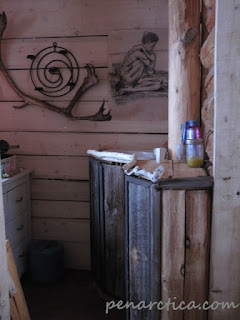 Apart from the supremely hideous shower stall, our tiny bathroom now features a sink. After washing in the kitchen for the last 16 years, my heart sings with joy each day as I make use of our new bathroom sink. The toilet remains where it belongs – outside, that is, where there’s a chance to watch the northern lights while occupied with more trivial matters.
And after years of perching our dinner plates on laps while sitting on the sofa, we now have a dedicated dining room table. The bench doubles as dog food storage (we currently have twenty 40lbs bags, the remainder of which are stored in a dog food closet and underneath the sofa). I also built doors and a pull-out storage box on casters for the huge pantry shelf that forms the third kitchen wall. 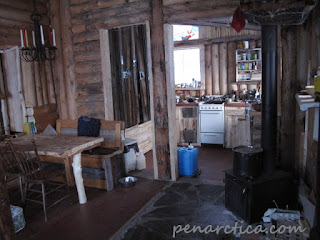 I’m usually struck dumb when I meet people again for the first time in months and stand mutely with a big a grin on my face, but somehow the helicopter didn’t chase all words out of my head – I’m proud to report that I was able to make halfway intelligent and intelligible conversation right away! In between unloading the chopper, bear-hugging my flu-infected boyfriend and inviting the pilot in for a cup of tea, I hopped around with the dogs in a little dance of happiness. While I am somewhat addicted to these long periods of loneliness, this has not been an easy one thanks to the dog emergency in November, the unusual lack of wildlife activity, my constant sore throat and the increasing frailty of my old dog.
I’ve rejoined the world of people, folks, and am wildly ecstatic about it.
Labels: carpentry wilderness life