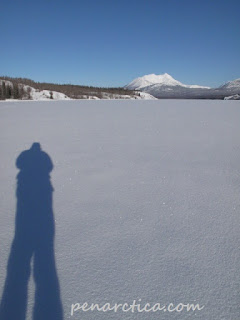 When I walk north these days, the sun doesn’t spill my shadow as far ahead of me as it used to. Shadow woman stays closer to me now, at flat bluish puddle at my feet, while the sun swings itself a whole hand width above the mountains and pours more light onto the land each day. At winter solstice, it inched its way over the mountain peaks with only a finger width of sky to spare.
It’s cold; well, sort of: the -30s have finally found us, but thanks to the brilliant sunshine and our large south-facing windows it gets so warm inside the cabin I don’t have to heat much during the day.
My old dog now wears not only booties but a warm vest when we go out. He had three spells of extreme exhaustion and weakness over the last few weeks, and I’ve shortened our rounds even more. I’m beginning to practice my goodbyes to him. I snuggle with him on the large dog bed that catches the sun and from where we can look out on the lake and the mountains, and I memorize the feel of his head underneath my hand. I inhale his smell that now carries a faint undercurrent of urine again, just like when I picked him up as a puppy at the humane society. 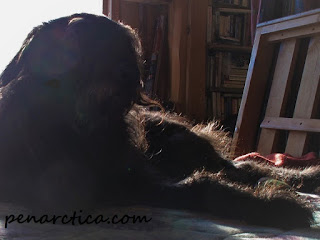 I tell him stories of the past, of how he was smaller than my cat and just skin and bones and urine-matted fur. He remembers the word “kitty kitty” and pricks up his ears. We wander down memory lane to when we still lived with road access and had a truck – definite interest in his eyes as I mention “truck” -, and we relive the times he was a bad boy and chased after moose. He knows “moose”.
But mostly we lie quietly and soak up the sunshine that slides across the cabin floor until night falls and the moon rises and the cold with it. 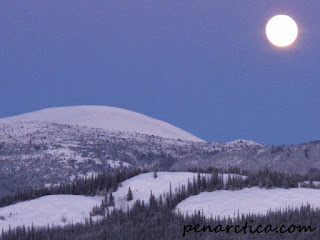