It takes a village to raise a bear

I had thought thirty six bears would make a lot of noise. But except for the odd soft moan the cubs are pretty quiet. A few of them sit in trees, a couple more are chasing each other around like kids in a game of tag, and one sits comfortably propped up against the chain link fence that separates these orphaned bear cubs from freedom. If it weren’t for the fence and the generosity of so many people and businesses, chances of survival would be very slim for these bears and the hundreds of animals who have already been rehabilitated and released back into the wild by Northern Lights Wildlife Shelter in Smithers, B.C.
My head is spinning with new impressions and information: how to clean the quarantine cages, where to put the feed buckets after cleaning them, what animals get how much of which food. “To cut up a deer bucket” is volunteer speak for chopping fruit and veggies for the deer fawns who also get a second chance here. One of the fawns currently in care owes her life to a farmer who delivered her by C-section when he came across a highly pregnant doe who had been struck by a motor vehicle – a story that went through the media this summer.

I have just joined the team at NLWS and am watching my fellow volunteers calmly feed the bears who are only now starting to make a bit more noise. Apples, squash, carrots, meat and fish rain out of buckets and tote boxes, are spread around the enclosure so even the shiest of bears get their share. Fascinated, I notice that the chubby cubs show no interest in getting close to the bear keepers. They get out of the volunteers’ way like the wild animals they are and gorge themselves on the food donated by kind-hearted individuals and business leaders.

While the cubs feed in one part of the enclosure, the volunteers begin cleaning the other part with Zen-like concentration and calm. Poop gets scooped into buckets, the water trough drained and cleaned. I’m taking mental notes, adding more information to my already stuffed head because I will soon be helping with these chores. To minimize the number of people the bears are exposed to during their stay and thereby avoid habituating the animals, only volunteers who commit for at least six months are allowed to look after the cubs. This also helps to monitor the health of the bears because the caretakers follow the development of their furry charges over months and can notice any changes.

Northern Lights Wildlife Shelter, a registered charity that operates without government funding, has 26 years of experience in wildlife rehabilitation and an excellent track record with bears in particular. So excellent, in fact, that it is the only facility worldwide licensed to take in and release grizzly cubs back into the wild. All the bears are released with ear tags and lip tattoos, some with radio collars. In accordance with regulations they are released in the areas they have originally come from.

But that won’t be until next summer, the time when these cubs would naturally leave their mothers. Sitting on his haunches and delicately balancing an apple on the back of his front paw the brown cub looks over at the other thirty five bears, the fence that was built thanks to donations, and then back at his apple. He turns it around for another bite. To me the chain link fence that keeps these animals safe until they can be released is starting to look like a symbol of the chain of people and businesses it takes to give orphaned wildlife a second chance. 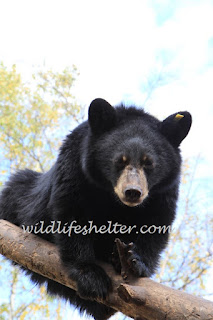