A long journey for a small bear


A tiny bundle of thin brown fur peeks out of the dog transport box with wary eyes. The small bear is suspicious of us: We have just released her into a quarantine enclosure for new arrivals at Northern Lights Wildlife Shelter. In the last days, humans have poked her with a sharp needle which made her go to sleep, locked her up in a crate, and driven her in noisy motor vehicles to this completely unfamiliar place.

Her journey began on a walking trail in the Kootenays where she had been spotted repeatedly on her own. When the village office’s phone kept ringing with calls about the cub, the waterfront area frequented by the little orphan was cordoned off to keep people as well as the bear safe. People tried hard to keep track of the cub’s location and kept calling in sightings to the B.C. Conservation Officers’ Hotline (1-877-952-7277), as well as NLWS. A file number issued by Conservation Officers Services for the bear ensured that the public, the C.O.s and NLWS were referring to the same animal. But would she qualify for rehabilitation?

To determine if a bear has indeed lost its mother, the cub has to have been observed repeatedly on its own for a number of days. As tempting as it may be to leave out food for an underweight orphan – fed bears are not candidates for rehabilitation. So folks in the Kootenay village made sure their garbage was locked up and did not feed the cub. Pictures of the little bear perched in an apple tree helped determine her size and thereby her age before she was caught by the C.O. - only bear cubs under one year are considered for rehabilitation. She was very small, definitely this year’s cub, hadn’t been fed, and so she qualified. But she was located in the Kootenays, over one thousand kilometers south of Northern Lights Wildlife Shelter.

People pitched in yet again to give this animal a second chance. The trucking company Bandstra Transportation, who has been helping orphaned wildlife for many years by transporting the animals for free, got the bear as far as Prince George. She missed the connection to Smithers, and after an appeal for help on NLWS’s Facebook page a member of the public jumped in and drove her the remaining distance.

Now the tiny cub is finally safe at NLWS. She weighs only 28lbs and looks so much smaller than the 36 black bear cubs who have been in care at the shelter for a while that it’s hard to believe she is the same age. She is very nervous, and so am I. This is the very first bear I will be looking after. It’s my responsibility to keep her enclosure clean, provide her with fresh water, fruit and veggies so she will be able to grow to a healthy weight, and to monitor her health.

The shelter has an excellent record of rehabilitating cubs that do not become problem bears upon release. I owe it to NLWS, to this bear and the community that worked so hard to save her to keep it that way. The cub and I will have to find a fine balance of respecting each other’s space without getting too familiar when I move around in her small quarantine enclosure to clean and feed.
The little bear cannot know our intentions, or what reactions her movements will trigger. Carefully she steps out of the transport crate. She keeps a distrustful eye on us, yet finds the courage to immediately make a beeline for the pile of fruit waiting for her. Her will to live and her hunger are so fierce she begins to eat even before we shut the door to her enclosure, and before her rehabilitation has properly begun. 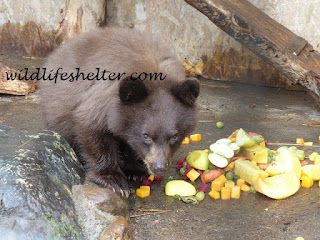