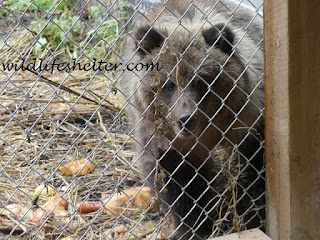 The rage and desperation of the grizzly cub tearing at the fence are terrible to watch. She roars and roars as she charges at the chain link fence, pulling at the strong wire mesh with her teeth and claws, looking for a weak spot – somewhere to break through and flee. The rattling noise of the fence drowns in her growls. She wheels around, starts to dig frantically at the gate, groaning and roaring. Her breath hangs in the air as grey puffs of mist that dissipate and go where she cannot: through the fence, back into freedom.

I am petrified in the face of her agony. I don’t know if I will ever get her roars out of my head again. If only we could make her understand that she will be okay, and free again next summer. It’s terribly sad to watch her, and equally upsetting to realize that all this could have been completely avoided. Her mother was killed and her sibling died in Bella Coola because food sources that weren’t bear-proofed kept drawing the grizzly family right into town.

Northern Lights Wildlife Shelter became the first facility in the world to rehabilitate and release grizzly cubs nine years ago, and in that time the shelter’s founders Peter and Angelika Langen have saved the lives of eighteen. Peter pulls up the slider to give the distraught cub access to the large part of her enclosure. She runs out in a blur of motion, gallops until she reaches the far end. Another roar as she reaches the fence. She veers off to the left and keeps running along the fence line, looking for a way out. But there is none.

Not a peep can be heard from any of the thirty seven orphaned black bears in the other enclosures as the grizzly rages on and slowly tires herself out. The black bears now seem very meek and laid back to me in comparison. One more job remains to be done today, one that is all joy instead of heartbreak: We can reunite Huck with his sister Lavender. Huck is black bear cub who suddenly became very ill, and who has now recovered thanks to the veterinarian’s, Angelika’s, and my fellow volunteer Jesse’s care. His illness still remains a mystery – blood tests and autopsy results from his other sister, who had the same symptoms and died, have so far proven inconclusive.

We ease the transport box into Lavender’s enclosure. As soon as Angelika opens the door Huck runs out, away from us, and instinctively looks for safety by scaling the fence. It’s great to see him so strong again – it’s a far cry from the weak and wobbly bear he was ten days ago. He’s clinging to the fence, then suddenly his head weaves and his nose twitches: he has smelled his sister. Lavender, who is hiding in her den box, peeks out at him. Paw by paw Huck climbs down and makes his way over to the den box where Lavender is already stretching her neck towards him.

Soft humming sounds come from both of them as they greet each other, touching noses. Huck climbs into the den box with Lavender and we watch with happy smiles as the two siblings keep nosing each other and snuggle up. As we softly close the door and take away the transport box to leave these two in peace, I notice that the grizzly cub has finally stopped roaring. Joy and heartbreak lie so closely together at NLWS, not only for the animals, but also for their caretakers.