A bucketload of happiness


Carrots are an abomination. At least that’s what Holly, one of the orphaned bear cubs I look after, seems to think. She has yet to eat a single one since she arrived at Northern Lights Wildlife Shelter on November 14th, while Berbere, my other furry charge, devours carrots as soon as he gets them. Bears, it turns out, don’t just have their own personality but also individual food preferences.

I ponder this fact every morning while I prepare the food buckets for my bears. As 31 of the orphaned cubs have started to hibernate, we are now feeding just the eight underweight black bear cubs, the little grizzly, our deer fawns, and the cougar and lynx who are the only animals that live permanently at the shelter. We also fill two food buckets for moose and deer who were rehabilitated here and occasionally drop by in the wintertime. This is one of the many ways wildlife rehabilitation helps researchers: the visiting ungulates allow long-term studies, for example on ticks and other parasites.

We chop and peel, filling the bear and ungulate buckets with fruit and vegetables given to the shelter by the local supermarket and individuals. We cheer when we find a large selection of our bears’ favourite foods in the donations – we’re as happy as the animals when we can serve them up a meal they’ll absolutely love.

Today we’re not just taking up food buckets to the group of non-hibernating bears. Four large garbage cans’ worth of raked-up leaves will provide enrichment for the cubs, whom we also give rotten logs at times so they can look for insect larvae, check out new smells and have something to play with. 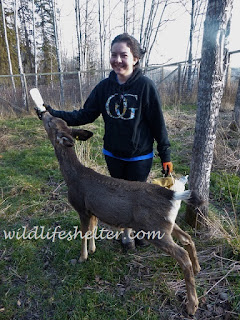 Our first stop, however, is the deer enclosure. For weeks, the fawns have already been free to come and go during the day. This slow release allows them to explore life in freedom, while the nighttime lock-up keeps them safe from predators. Deer and moose aren’t fussy eaters. Our two fawns’ only complaint is that they are now being weaned, and for the first time we’ve arrived without their beloved milk bottles. Friday looks up at me with big liquid eyes and tries to suckle on my jacket, while Trooper circles around us, bumping our legs with his head in the hopes of triggering a milk flow. He is powerful – I’m happy I’m not a doe. They soon settle for the familiar bucket of vegetables, and after putting out the moose buckets we carry on to the bears.

The cubs know the routine by now: cleaning comes before feeding. Holly ducks into her den box while I shovel poop, wet pieces of straw and bits of leftover fruit into the cleaning bucket. Then I spread piles of leaves for her. When I leave the enclosure she quickly darts out of her den to check out the new smells, and dives back into it when I enter with her food. It’s almost like a dance. We move back and forth, keeping each other’s bubble of personal space intact, though the bears are always made to yield to us. This helps keep both people and bears safe upon the cubs’ release back into the wild.

I hide some of Holly’s favourite foods under the leaves so she can forage for them. It won’t take her long. Her keen sense of smell will let her zero in on them right away, plus she’s cheating: now that I’m done with the boring cleaning she’s watching what I do. No worries, Holly, we’ve saved the carrots for the other bears.
Labels: bears deer Northern Lights Wildlife Shelter wildlife rehab