How to get a bear's "pawtograph"


The sedated black bear cub in my arms feels like nothing more than a scrap of fur. His limbs are loose and relaxed from the sedative, and I lean back so his head doesn’t loll. A wild and sharp smell with an underlying aroma of cloves clings to him and rises up to me. He has just been through the standard admittance procedure at Northern Lights Wildlife Shelter: he has been ear tagged, microchipped, weighed, and dewormed.

While the ear tag can help to identify him after his release, the deworming will hopefully allow him to pack on weight faster and keep his caretakers at a lower risk of picking up worms from him. Along with the ear tag number, his weight and state of health information, we also file away the little bear’s paw prints. They are his unwitting contributing to help pay for his stay.

To avoid habituating the bears to humans, Northern Lights Wildlife Shelter is closed to the public except for one single day of the year, July 1st. But every winter brings the chance for wildlife supporters to connect with the bear cubs in care in a very special way. Paw prints (or “pawtographs”, as veteran NLWS volunteer Kim likes to call them) can be won during the annual Dawson’s Lights Fundraiser held on the shelter’s Facebook page in the four weeks leading up to Christmas. 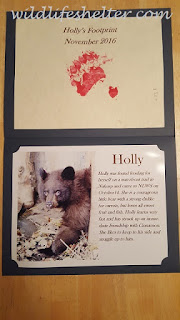 Named after a bear cub called Dawson, the event was initially started to raise money for his radio collar. It has since become a tradition to help with the operating costs of the registered charity. Every $20 donation lights up a bulb on a pine tree outside Smithers’ Feed Store, and every donor has a chance of winning a paw print of the currently 41 black bear cubs in care, along with a photograph and short write-up on the bear. The aim is to have the entire tree lit up by Christmas.

Why spend money on giving orphaned wildlife a second chance? At first glance wildlife rescue and rehab seems to be all about saving the life of an individual animal. The young animals that arrive at the shelter stand a very small chance of survival out there on their own. But it is so much more than that.

The time orphaned wildlife spend in care offers a rare opportunity to learn about their behaviour, health issues and habits. However, the impact of wildlife rehabilitation doesn’t end there. It continues on through generations because the animals, once old and healthy enough to survive on their own, are released and reintegrate back into the wild animal population. 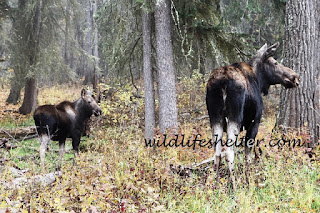 The bears at Northern Lights Wildlife Shelter get all the press, but the shelter rehabilitates all mammals, among them many deer and moose. Contrary to bears, the deer and moose can be released right at the shelter and often return to visit over the years. This makes the long-term success of rehabilitated fawns and calves in the wild a lot easier to track than that of bears. Rehabbed moose returning years later with their own calves in tow illustrate how saving the life of one orphaned animal can actually mean saving the lives of their potential offspring, and help shore up the numbers of their species.

I gently lay down the little bear cub in his enclosure to sleep off the remaining effects of the sedative. He doesn’t know it, but it’s the support of complete strangers out there that will allow him to grow and one day leave his tracks in the wilderness again.
Labels: bears moose Northern Lights Wildlife Shelter wildlife rehab