Starving on a full stomach 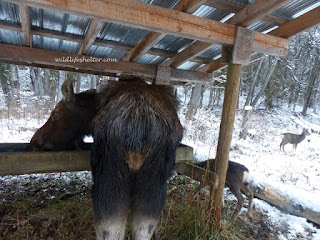 “Rain” looks like a ghost moose. The now four-year-old cow who had been orphaned as a small calf and raised at Northern Lights Wildlife Shelter now looks like a skeleton covered with fur. Her hip bones jut out over deep hollows where flesh and muscle should be. It’s easy to count her ribs. Her hind legs are spindly; the massive leg muscles seem to have wasted away.

She did not use to look like this. NLWS rehabilitated her as a young calf and she was released healthy. Rain thrived in the wild and had at least one calf. It’s only when she showed up again at NLWS last August and began staying around the area that it became apparent something was wrong with her: liquid diarrhea caked her hind legs, and she looked a bit skinny. Rain continued to lose weight at an alarming rate, dripping diarrhea wherever she went.

I half expected her to suddenly drop dead, but instead another adult rehabbed moose cow, Belle, was found dying nearby. She had had a calf last summer who looked just fine, and while Belle had pulpy diarrhea and looked a bit skinny, she wasn’t even closely as emaciated as Rain. And yet it was Belle who died.

The vet was called for a post-mortem on Belle. He didn’t find any apparent abnormalities, other than that the animal showed clear signs of starvation. Yet her stomachs and intestines were completely full. Opening the stomach revealed soupy yellow-greenish contents. The organs and samples of the stomach contents were sent in to a laboratory for analysis, but the result came back inconclusive.

Without any firm evidence at hand, the mystery of moose starving on a full stomach is at this point a matter of piecing together bits of evidence. And it seems that hay may lie at the core of the problem.
Smithers is farm country, and in winter both deer and moose can often be observed feeding on large hay bales left out in the fields. While hay is good fodder for cattle and horses, it can be deadly to deer if consumed in quantity over a long period of time, and if the animal is weakened or has an underlying health issue. It takes ruminants like deer and moose weeks to adjust their digestive system to food that is different from what they would normally be eating at certain times of the year. As a result, they cannot digest hay properly, are unable to get enough calories and nutrients from it to maintain or improve physical health, and can starve to death on a hay-filled stomach. This phenomenon has been studied in deer for decades.

Far fewer studies have been done on moose. In the early 1990s the Alaskan Moose Research Centre in Soldotna studied how eating hay affects moose and found that over a period of eleven weeks, adult moose who exclusively ate hay lost an average of 53kg of body weight. Calves maintained their body mass, but had lost all the fat on their rump at the end of the trial, putting them at increased danger of starvation. For animals with an underlying health problem, even a minor one, this can well be a death sentence.

It seems that leaving hay accessible to deer and moose can have potentially lethal consequences for them. This might point to another aspect of declining moose numbers in areas where farm country and moose habitat intersect. Northern Lights Wildlife Shelter is hoping to monitor if Rain will survive the winter, and how much of an impact hay consumption has on the health of their rehabbed moose and deer after they have been released.
Labels: moose Northern Lights Wildlife Shelter volunteer wildlife rehab