Waking up from hibernation


Forget Groundhog Day. It must be spring now: our bears are awake. We’ve been anticipating the 31 black bear yearlings who have been in their dens since mid-November to wake up for a while. Over the last weeks, we heard them knocking around in their boxes and having arguments in increasing volume and frequency, so it didn’t come as a surprise when the first bear stuck his head out on March 14th.

Getting used to the bright daylight and walking around after all these months of hibernation is no easy matter. Blinking bleary-eyed into the sunshine and drinking in lungfuls of fragrant spring air, the cubs come tumbling out of the dens. They stand on rubbery legs, seek each other’s furry shoulders for support. It’s not like they have whiled away the winter in complete laziness, though: 26 of the cubs, who all chose to hibernate in the same large den, have managed to reduce five bales of straw and a large load of spruce branches to a layer of chewed-up, crumbly dust over that time.

The bears look giddy to be out again. On legs that appear to be about as strong as cooked spaghetti, Nutmeg, a bottle-raised yearling, saunters toward the heads of lettuce the bears are offered as a first food after hibernation. It’s almost as if there is a time lapse between moving each individual leg, as if Nutmeg has to think about how to set his paws forward. He flops down on his ample butt in front of a head of lettuce and grasps it roughly with his front paws. Bears are normally extremely dexterous and can use their paws very delicately and precisely, but it looks like these fine motor skills are beyond a bear who’s just become active after months of rest. 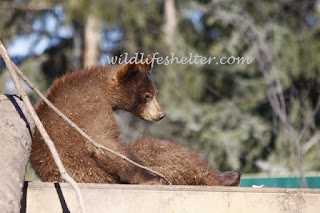 Even sitting up is too much work for Nutmeg: He lets his bum slide forward, slide until he’s lying flat on his back, hind legs spread wide, and clumsily clutches the lettuce to his chest. He takes a few bites, then lets it roll away and drops his front paws as if so much work defeats him. Lying spread-eagled on his back with shredded greens sprinkled across his chest, he cranes his neck to see how his den buddies are making out with the food. He just can’t work up enough motivation to eat more right now.

It takes time for the bears’ digestive systems to get going again after all these months. The greens we are offering now help with that. Just as we tried in late fall to mirror the diminishing, lower-calorie foods bears find in nature just before going into hibernation, we are now imitating the nutrient situation wild bears are faced with in spring. We are feeding watery, low-calorie greens, then some root vegetables, and eventually higher calorie fare, as well as meat and fish for protein.

People often wonder if these cubs won’t seek out gardens after their release back into the wild; after all, at the shelter they are largely fed fruit and vegetable donations from supermarkets. Post-release monitoring shows, however, that they instinctively feed on the same wild foods as bears who have not spent time in human care. In fact, whenever we can offer them wild foods such as dandelions and berries, they much prefer it over garden vegetables.

Meanwhile Nutmeg has discovered his lettuce decoration and is awkwardly trying to eat the greenery in his chest hair. His job is to keep growing and get stronger until his release in June, ours is to organize enough food for the 45 bear cubs currently in care. Spring has sprung indeed.
Labels: bears Northern Lights Wildlife Shelter volunteer wildlife rehab