Only two more months, and the bear cubs currently in care at Northern Lights Wildlife Shelter will be released back into their home regions. The logistics of transporting 44 black bears and one grizzly to sites all across British Columbia seem daunting to me. But NLWS founders Peter and Angelika Langen have done this for 27 years and are up to the challenge – the trickiest of which might be to capture the grizzly cub Shadow for release.

Shadow arrived at Northern Lights Wildlife Shelter in late October absolutely wild with rage. Her desperate roars echoed off the mountains as she tore at the fence of the grizzly enclosure, trying to get out. Her mother had been shot after foraging in Bella Coola where food was left accessible to bears. NLWS was Shadow’s only chance at survival.

Just about all bear cubs, even grizzlies, eventually accept their temporary fate of living in human care. Shadow, however, is different. She wants nothing to do with people at all and hides in her den box when she catches a whiff of human scent. In the five months she has been here, I have seen her maybe three times. Even Peter Langen, her caregiver, rarely gets a glimpse of her in daylight. Her strong tendency to avoid humans may help her survive in the wild, but it poses challenges for capturing her for release. 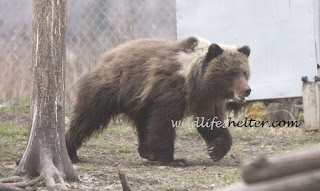 The normal procedure is routine for the Langens. A transport box or bear trap gets readied, the yearling is quickly tranquilized in their enclosure, and weighed, paw printed, and lip tattooed in addition to the ear tag and microchip the animal has already received during the admittance health check. The bear is then put into the transport cage and can be sent back to freedom. Tranquilizing a bear in the enclosure is normally not all that difficult, especially with black bears who can easily be shooed up a climbing tree and injected with a needle fastened to a long pole.

Cornering Shadow with a needle would mean provoking her into a charge, however. Her distrust of humans is too great. Chasing her out of the den and darting her as she runs though the enclosure is also not a good option, because the more adrenalin an animal has pumping through their veins, the less effective the tranquilizer is. The normal dosage is unlikely to work properly when the bear is extremely agitated, while a higher dosage runs the risk of killing the animal by overdose.

The plan to capture Shadow is now to get her used to feeding in a small part of her enclosure that can be closed off from the rest with a metal slider. By connecting the slider cable to a piece of meat just prior to her release in June, we hope she will lock herself into the smaller space and vent her anger until she can be tranquilized through the fence.

The procedures leading up to the bears’ release, including the road trip – in many cases the yearlings face a journey of over a thousand kilometres from Smithers – are no doubt unpleasant and very stressful for the animals. After their months spent in human care this is a good thing, though, because it reinforces that humans are unpredictable and close contact will have unpleasant results.
We want these bears to succeed and live the lives they were meant to lead. And with the Langen’s track record of just under 400 bear releases, and I have the best hopes for Shadow and the other cubs.
Labels: bears Northern Lights Wildlife Shelter volunteer wildlife rehab