I wonder how many other people are out there who set their alarm to dismember a dead mouse. It’s not the most pleasant task to wake up; mouse guts have a peculiar smell, and the soft yielding of small bones, fur and flesh to the snipping of my scissors has a certain creepiness to it.

I brace myself with another sip of coffee for this unsavoury part of my role as owl foster mom and cut the mouse head into bite-sized pieces. While the three little saw whet owlets twitter excitedly in the bird cage to my right, four-month old black bear twins Nahanni and Logan are wrestling up a storm in the mammal cage to my left. They are busy practising bear skills like shredding rotten wood and swatting their paws at each other. A glance into their feeding area shows me that they’ve also been using their water bowl as a wading pool again and have liberally sprinkled the floor with their veggies, dandelions. It almost makes for a meadow ambience.

Mouse dissection completed, I lift the three owlets into a clear plastic box lined with paper towel. These little orphans came to Northern Lights Wildlife Shelter when the tree that housed their nest was cut down. The property owner, who hadn’t realized owls were raising their young ones in the tree, brought the babies in. At that point, they were just a few days old: only one had open eyes. 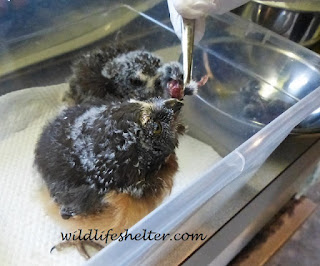 They are now roughly the size of a tennis ball. A very fluffy tennis ball, because their dark orange and grey feathers are coming in at a very fast rate. Gone is the homely, stubbly look that reminded me of bits of dryer lint stuck to ping pong ball with a glue gun. There is a marked size variation between the three owlets, but all three focus their yellow eyes on me now in anticipation of breakfast, the broad beaks like a good-morning-smile.

Breakfast is fewer mice than it used to be: the owlets were gaining weight too fast, NLWS’s co-founder Angelika Langen noticed. We volunteers have been too well-meaning when feeding them, unwittingly illustrating why lay people shouldn’t raise orphaned wildlife but drop the animal off at a rehab shelter. Instead of prodding each owlet into grabbing a piece of mouse, we should just be offering it to the little birds briefly. A hungry owlet will open wide and try to grab the piece, while disinterest and a closed beak mean the bird is full.

I use a pair of tweezers to dangle a leg of mouse in front of the chirping birds. The two biggest owlets go for it, and it disappears down the red throat of the medium-sized bird who keeps staring at me with her yellow eyes. I make more rounds between the three beaks with bits of guts, more legs, and pieces of head, and as the mouse parts dwindle, so does the interest of the owlets in having more. The yellow stare leaves my face, they begin closing their eyes and huddle up to each other.

Putting them back into their cage is becoming more tricky than it used to be: their talons have developed pretty good grip already, and the biggest owlet clings to my finger while flapping her wings furiously and snaps her beak as I transfer her out of the feeding box. Her siblings follow suit, and then it’s time to clean up my mouse butchering gear to mix some milk for the little bear cubs. It may be a weird way to start the day, but it’s hard to beat.
Labels: animals Northern Lights Wildlife Shelter volunteer wildlife rehab