We’ve been in a bit of a holding pattern here at Northern Lights Wildlife Shelter, waiting for this year’s first little orphans. It’s a weird, contradictory feeling: I don’t want any animal to experience the trauma of losing its mother and find itself in the completely unfamiliar and initially terrifying situation of being taken into human care. On the other hand, I chose to volunteer here for a year to learn more about wildlife. I want to look after animals. And so I find myself waiting for a tragedy to happen in an animal’s life.

We’ve been raking our hearts out while preparing for the first animals of 2017 to arrive. Never has dead grass been embraced with more fervour and enthusiasm than by our 45 bear yearlings, who are making it increasingly clear that they feel ready for freedom by shredding everything in their reach. Den boxes, climbing trees, even the ceiling of a partly covered enclosure are falling victim to the bears’ claws and teeth.

The bears concentrate hard as they sniff the dead grass we bring in to them, a little taste of the outside world. Pulling it apart with their claws, elbow sticking out to the side, they lick up bits of roots and insects, until the new smell experience becomes too much. Like dogs overcome by a powerful smell, they throw themselves into the grass, rubbing their neck and shoulders into it. Wrestling matches start up and turn into wild games of chase, until the grass we’ve painstakingly raked has turned into a trampled carpet on the ground of the enclosure – where we get to rake it up again and consign it to the manure pile.

While the dead grass, as well as rotten logs and hidden bits of food keep the bears occupied, we are busy with spring maintenance of the grounds and preparing enclosures for the first new arrivals. Wildlife rehab is in many ways unpredictable – it’s a guessing game when the first animals of the year will be dropped off, and what species it might be. Keeping a small, varied stock of specialized milk powders formulated for the nutritional needs of the different species on hand is part of being prepared, as well as stocking things like different sizes of bottles and Miracle Nipples (which apparently work really well for baby squirrels).

With all this prep work going on, I almost feel like an expectant mother – excited, a bit nervous, and wondering what the baby will look like. We’ve learned from Angelika Langen, NLWS’s co-founder, about the importance of moose and deer calves getting colostrum, the benefits of bottle feeding versus tube feeding, and the necessary hygiene regimen during bottle feeding. We’re prepped, we’ve got Miracle Nipples, we’re ready!

And now the first little orphans of the year have arrived: two tiny black bear cubs whose mother was killed in a car collision. Staring at the two frightened cubs huddled against each other, so very vulnerable, I realize I will never be completely ready, no matter what animal it is. I am not excited. I am not joyful. I am devastated because these cubs are so scared, barely daring to glance at us, and they have lost everything they had – their mom. 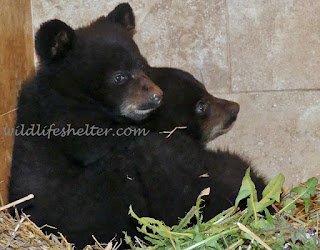 I know from looking after the other bears that in all likelihood, these two will overcome their fear, grow and thrive and get released next year back into the wild. But in this moment, I’m caught in the contradiction of trying to build health and happiness out of sorrow and fear. I wonder - maybe that is exactly what these animals can teach us.
Labels: bears Northern Lights Wildlife Shelter volunteer wildlife rehab