The black nose sticking out of the feeding hole in the bear barrel twitches, inhaling the multitude of new smells: cedars, wildflowers, road dust. Then a familiar smell - me. The light brown eyes find mine. Berbere, the black bear yearling I've been looking after since he arrived terribly small and underweight at Northern Lights Wildlife Shelter late last fall, looks at me full of confusion.

He is locked into the barrel with three other yearlings from his enclosure, and has been transported over a thousand kilometers from the wildlife shelter back into his home region. I breathe in the spicy bear smell that wafts out of the barrel and tell the half grown cubs again that everything will be okay, that soon they will be free. If only they could understand.

Or maybe they do know, because they have been travelling extremely well. We are transporting a total of ten bears in two barrels and three boxes, and there are no fights, not even stressed moans. Do they remember how they were transported this same route to the shelter last year as small orphaned cubs, so scared and distraught?

Plumes of dust rise behind our vehicles as we rumble up the rough dirt roads to the remote release location picked by Conservation Officer Services. Finally a side valley opens to the left. We roll to a stop and angle the truck so the barrel points to the open area. The road dust settles and the only sound is the stream rushing down below. The bears are quiet, alert. This is it, the moment we've been working toward all these months.

I am torn between overwhelming joy that our bears are finally free to go, free to live the life they are meant for, and overwhelming sadness that I will never see them again, will never know how it will work out for them. The first bear peeks out of the now open door of the barrel, sniffing, hesitating. A cautious jump and he's on the ground, starts scratching in the soil. His sister follows, takes a few steps. The third bear jumps out into freedom and immediately sprints for the trees, sends the other two running. And Berbere? I wait. Nothing happens.

I look into the barrel and see he's clinging to the metal grate in the front, still looking at freedom through bars. Finally he lets go and slowly comes to the open door. He stops, sniffs the ground. I hold my breath. He hops down, looks around and hears one of the other yearlings huff in the trees. As if that is his signal to go, Berbere starts trotting off into the opposite direction. He briefly glances my way and seconds later breaks into a run. A jump into the undergrowth downhill, and then he's gone from my life, disappeared into a future without fences and food buckets.

I hope his will be a rich and full life, and that he’ll make the most of the chances nature offers him. Berbere and hundreds of other animals wouldn’t be alive if it weren't for people calling in their sighting of an animal in distress, and the CO's decision to send the orphans to Northern Lights Wildlife Shelter founded by Peter and Angelika Langen 27 years ago. Wildlife rehab not only helps us to better understand these animals, and to mitigate some of the negative impact we as humans have on wildlife populations - it also highlights the incredible acts of kindness people are capable of. Berbere is one more symbol of that. Farewell, my friend. 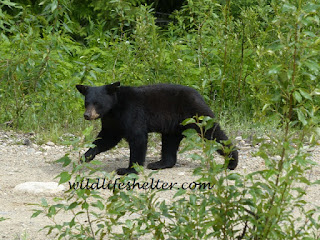