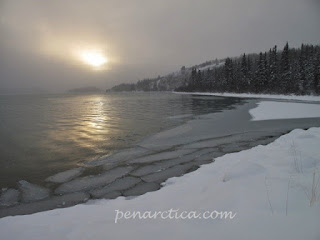 These days I exist in a world of dramatic light strained through versions of water. Snow clouds scrape across the mountains even lower than the sun hangs in the sky. When the clouds empty, streaks of miniscule icy pellets crosshatch the land; other days it’s dreamy fat flakes, a toss of snow stars, or just your general steady falling of snow.

The lake melts into the sky, throws up armies of fog ghosts who twirl and contort themselves across the wind-whipped surface, reaching for those water molecules who have already condensed into a solid blanket of grey fog overhead.

The top layer of water is trying to hang on to the lake now, pupating into delicate see-through ice feathers that sprout ever more tendrils, forming islands. Getting thicker, coagulating, yearning to stop the constant movement the wind is forcing on them.

But the wind knows no mercy. The snow clouds get ripped apart, the ice fog torn open, sunlight pushed through the ice crystals suspended in the air until it becomes so rich a yellow I want to stick my hand into it. The wind slaps the lake around, undeterred by the screeching and crunching of ice that hasn’t had a chance yet to grow from shore to shore, to become solid enough to withstand it. Ice feathers, ice islands, ice pans get slammed against shore, ground up and folded back under water. 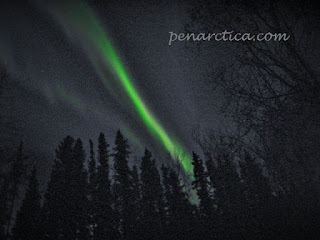 On clear nights, there is light of a different kind while the lake still laps at the rocks, unsettled.