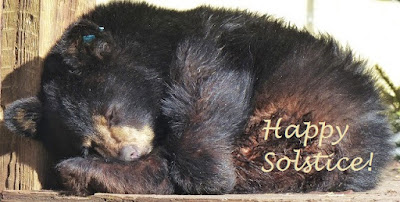 Just before the last winter Solstice, this bear cub was found severely hypothermic and half frozen by the side of a B.C. highway. The kind person who cared enough to stop was able to simply pick him up: the little cub had no fight left. At Northern Lights Wildlife Shelter, he passed out in front of his first bowl of food. He could barely move.

Spirit made a full recovery and was released back into the wild in mid-June this year together with his good friend Mimosa who came from the same region.

The bear cubs I cared for during my ten months at the shelter are always on my mind, especially the thirteen yearlings we released. I hope Spirit, Mimosa and the others are safe and hibernating in good dens, and that those who have not survived will have known happiness in their time back in the wild.

The sun will spill more light now regardless.