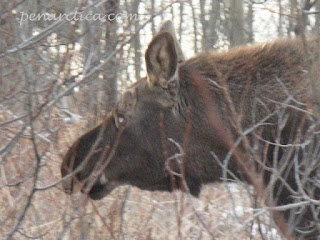 The milky left eye of the bull calf tells the kind of tale we’re privy to: tiny excerpts of drama that played out elsewhere. Last time I saw this moose his eyes looked normal. What happened to the left one in those three weeks? He twitches back when small poplar branches scrape against that area of his head.

I feel immediately sorry, worried, concerned. How will he be able to deal with wolf packs or grizzly bears? Does it hurt? But then I notice how sturdy-looking he is and remind myself of the injured animals I met during my time at Northern Lights Wildlife Shelter, their incredible resilience and ability to heal or just get by in spite of handicaps.

And the little bull still has the protection of his mother for another five months. She’s pruning poplar twigs, pulling a mouthful of old fireweed leaves out of the snow for variety. The snow is a sunken, miserable shadow of its former fluffy self: Over a week of above-freezing weather including rain has reduced it to something like Crème brûlée. The crust is hard enough to step on for the fraction of a second, then breaks with a crunch as the foot sags into the snow underneath. It must be tough for heavy animals like moose, caribou and wolves, because every step creates sharp-edged craters. 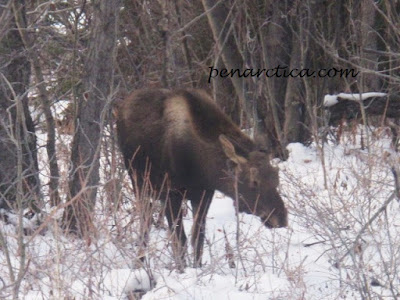 Indeed, the moose prefer to walk on my slick glacier-like trails, a spider web of ice that I can only negotiate with ice grips under my boots. Alone in the bush for another two months, I cannot afford to sprain a limb and creep around as cautiously as a ninety-year old. The greatest difficulty is getting water. The open lake keeps chewing away at the north and south edges of my seven square kilometer ice floe and has managed to push against it so much, I now have a knee-high wall of ice along shore. This slopes down to the ice floe proper where my water hole is located at a very steep angle and is as slippery as a skating rink. It’s a pain to negotiate, even with the ice grips under my soles, and pulling the full water canisters back up over it and up the glacier path to the cabin feels more like ice climbing than walking. If this is the way of the future, I have to say I don’t like it one little bit. 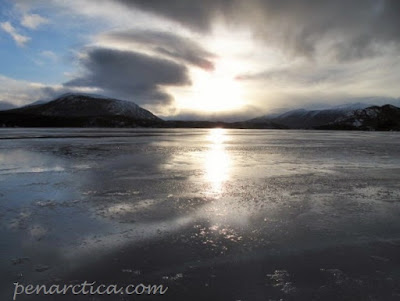