It's been a long, long time since my last post and the title of this one is fitting in more ways than one: strong winds this months spread a wildfire that had been smoldering since July at the end of our lake into our direction. Living right on the water's edge as we do, the fire wasn't too concerning as far as potential danger to our lives goes, but obviously neither one of us would like to see the trees and bushes, the wild meadows or animals we love so much burn.

Chances of the fire still advancing all the way to our place are slim, given how late in the year it already is, but a structure protection specialist flew in nonetheless and took down the necessary information on how many sprinklers, pumps and length of hose would be needed in case the fire manages to hurl itself close to our assorted doorsteps. 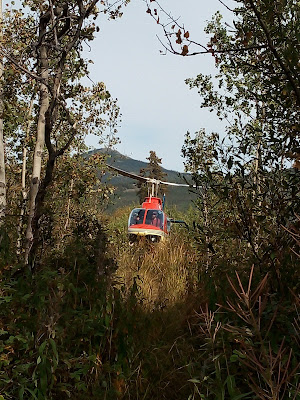 The fire fighters ended up doing a back burn to rob the flames of their fuel, and that daring feat combined with the wind turning and generous amounts of rain have pretty much snuffed the fire out now, though it occassionally still sends out a plume of smoke in greeting.

It's been a hot, though not too dry summer of the very busy kind, and it feels like I spent most of in front of my laptop finishing my novel. It just dawned on me that I'm celebrating my 21-year anniversary of off-grid living this month, and while life without the umbilical chord of telephone connection, power lines and running water is still unspectacular, sweet and not particularly noteworthy, I felt like giving this little toast to outsiderdom.

I've backdated the posts below to maintain some sort of semi-chronological order here. My apologies for the long silence; it probably won't be a one-time occurence. I want to keep the focus of this blog on what it's like to live without road access in the northern wilderness and not on myself, so as I spend time with elderly family, take wildlife rehab courses and do more wildlife rehab work, plus venture down to Arizona again to - hopefully! - actually thru-hike the Arizona Trail this time, I won't  be posting. Well, I might sneak in a snippet or two on wildlife rehab ... we'll see.

In the meantime: thanks for reading!